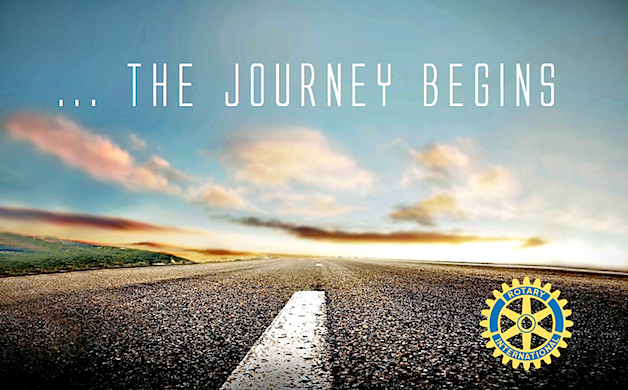 It was thirty-two years ago when I joined Rotary. I was twenty-eight years old at the time. I jumped right into my club full of enthusiasm and served with passion.

The PETS committee had tried to wear my classmates and I out with a multitude of mundane chores which they deemed in their infinite wisdom necessary to properly initiate the new District Governor Nominee Designates in the ways of the operation.

After our dinner program I eased out to the pool and joined my good friend John Litton. John is a Rotary past-President from Crystal River now living in Orlando. We started brain-storming about things to do during my year as Governor. I already had developed some ideas about what I hoped to achieve during the year I served and membership was a priority. We bounced ideas for a theme; “Find one and bring one” was one that evolved and then John Litton refined it to “EveryONE Bring ONE” , and thus, the ONE theme was born.

A few months earlier to PETS I was sitting with the District Governor selection committee in Clearwater. I had been asked for the previous three years in a row to “throw my hat in the ring”, but I had declined for personal reasons, primarily, until our son went off to college. Now with our son attending college, I agreed. One of the dozens of questions the committee asked me was “why do you think you are the best person for the job”? I had a simple response; I said ” I am not the best person for the appointment as there are many Rotarians far more qualified than me, however I am willing and able to do the job”. Obviously, I ended up with the responsibility to lead District 6950 in the 2014-2015 Rotary year.

We are fortunate to have many really smart and hard working people working at the District level and our District would not be doing nearly well if we’re not for them. Most have no desire to be governor, but they all have a common desire to serve Rotary and our District.

Since Rotary’s early day’s ” Service Above Self” has been the practice to which Rotarians subscribe. If you stay in Rotary long enough you will feel the essence of Service Above Self. It may just happen when you are working on a community project, or helping the young people in our local schools, or packing meals for Stop Hunger Now. It may happen when you have a made a contribution to a worthy cause. At some point a member of Rotary becomes a Rotarian. If your there already there then I don’t need to say anything else, if you not then it is time to “Engage Rotary and Change Lives”.

Getting down to business ; Membership is extremely import to any organization. Membership will be the focus of my year as Governor. Let’s keep it simple. I would like you to go out and “Find ONE and bring ONE“. It’s that simple. And in the larger scheme of things I would like “EveryONE to Bring ONE”

I am looking forward to meeting every Rotarian in our District and learn about all the good deeds you and your club does! In the meantime I will post here regularly to help keep you posted on the activities in our district.